BE AWARE. MAKE A DIFFERENCE.

According to the National Human Trafficking Resource Center:

Sex trafficking is a modern-day form of slavery in which a commercial sex act is induced by force, fraud, or coercion, or in which the person induced to perform such an act is under the age of 18 years. Enactment of the Trafficking Victims Protection Reauthorization Act of 2005 (TVPRA) makes sex trafficking a serious violation of federal law.

The term “commercial sex act” means any sex act on account of which anything of value is given to or received by any person.

The TVPRA recognizes that traffickers use psychological as well as physical coercion and bondage and it defines coercion to include ..physical restraint against any person or pattern intended to cause a person to believe that failure to perform an act would result in serious harm to or physical restraint against any person; or the abuse or threatened abuse of the legal process.

Sex traffickers frequently subject their victims to debt-bondage . They tell the victim that they owe money for living expenses and transport into the country.

Sex traffickers use a variety of methods to “condition” their victims including physical abuse, rape, threats to victims’ families.

Psychological harms include mind/body separation and disassociated ego states. Victims are at risk for Post-traumatic Stress Disorder-acute anxiety, depression, insomnia..and self-loathing that is long-lasting and resistance to change.

Victims may also suffer from traumatic bonding-a form of coercive control in which the perpetrator instills in the victim fear as well as gratitude for being allowed to live.

Trafficking victims have multiple needs upon escaping their trafficking situation. It is important to first establish the victim’s safety, then determine other immediate needs. Language access needs should be assessed immediately, and adequately provided. An Emergency Response Plan may assist in determining how to best evaluate a victim’s needs and how to best meet those needs.

The Trafficking Victims Protection Act of 2000 provides for prevention, protection, and prosecution in trafficking cases. The protections provided to victims of human trafficking include, but are not limited to, the following:

Some rights given to Domestic Minor Sex Trafficking victims include:

The London Police Department has joined efforts with the Southeast Kentucky Human Trafficking Task Force (SEKYHTT) to help end modern-day slavery.  The Department's Public Information Officer, Magen Zawko, is the co-chair for the task force. The task force is a collaborative community effort by law enforcement agencies and community-based organizations to battle human trafficking by identifying, rescuing and empowering survivors.

The group aims to provide resources and services to the victims of human trafficking through collaboration and cooperation of community partners.

To get involved with the task force email sekytaskforce@outlook.com. Or visit the group's Facebook Page. 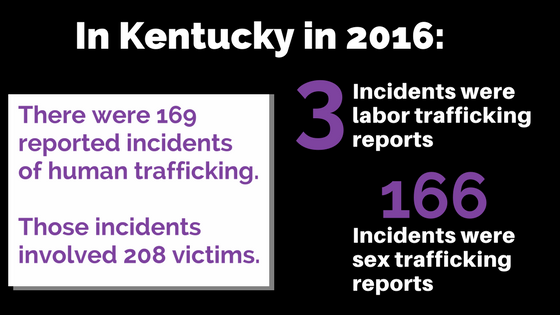 A message from a survivor

If you or someone you know needs help please call 1-888-373-7888 or text BeFree (233733). The National Human Trafficking Resource Center (NHTRC) is a national, toll-free hotline, available to answer calls and texts from anywhere in the country, 24 hours-a-day, 7 days-a-week, every day of the year.